News You Can Use

Humanity was born in a fertile river valley in northern Botswana. A new study published in the journal Nature reveals that the earliest anatomically modern humans (Homo sapiens) arose 200,000 years ago in a vast wetland south of the Zambezi river. It has been called by the team working on the project the "cradle of mankind."

The region – which also covered parts of Namibia and Zimbabwe – was home to an enormous lake which sustained our ancestors for 70,000 years.

“It has been clear for some time that anatomically modern humans appeared in Africa roughly 200,000 years ago. What has been long debated is the exact location of this emergence and subsequent dispersal of our earliest ancestors,” said Professor Vanessa Hayes, a geneticist at the Garvan Institute of Medical Research in Australia and the lead researcher on this project.

To determine the precise location, Professor Hayes and her colleagues collected blood samples from study participants in Namibia and South Africa and looked at their mitochondrial DNA (mtDNA). mtDNA is passed almost exclusively from mother to child through the egg cell and its sequence stays the same over generations, making it a useful tool for looking at ancestrial roots.

The team focused their research on the L0 lineage – modern human’s earliest known population – and compared the complete DNA code (mitogenome) from different individuals. The researchers then combined genetics with studies of geology and climate predictions to help create a picture of what the world looked like 200,000 years ago. Geological evidence suggests the region once housed Africa’s largest ever lake system, ideal for early survival. Eventually climate change made travel easier for early humans to trek farther away. Professor Axel Timmermann, a climate scientist at Pusan National University in South Korea, said: “These shifts in climate would have opened green, vegetated corridors, first 130,000 years ago to the northeast, and then around 110,000 years ago to the southwest, allowing our earliest ancestors to migrate away from the homeland for the first time.”

Professor Hayes said: “We observed significant genetic divergence in the modern humans’ earliest maternal sub-lineages that indicates our ancestors migrated out of the homeland between 130,000 and 110,000 years ago.

“The first migrants ventured northeast, followed by a second wave of migrants who travelled southwest. A third population remained in the homeland until today.”

One expects to find arsenic in the brandy of the rich uncle you're trying to bump off for their wealth. One does NOT expect to find it in the bottled water you buy from your friendly local mega-retailer.

In a report published on June 18th, 2019 by the Center for Environmental Health, it was announced that the water brands Peñafiel and Starkey, which are sold in Walmart, Target, and Whole Foods, contained a higher than legal amount of arsenic. Peñafiel is owned by Keurig Dr. Pepper. It is sold at stores like Walmart and Target. Starkey is owned by and sold at Whole Foods.

“Consumers are being needlessly exposed to arsenic without their knowledge or consent,” said Michael Green, Chief Executive Officer of CEH. “Customers typically purchase bottled water at exorbitantly high costs with the assumption that it is safer and healthier to drink than tap water, unaware that they are ingesting an extremely toxic metal linked to birth defects and cancer.”

We buy a million plastic bottles a minute worldwide. This insanity has to stop and you can do something about it.

A study by Euromonitor international revealed that human beings buy a million plastic bottles every minute, and that number is likely to jump 20 percent if trends continue. That comes out to something like 20,000 bottles every second and around half a trillion bottles a year.

Guess where most of them end up? Do they get recycled, turned into shoes, teeshirts, and other articles of polyester clothing? Sure, some do. But only somewhere around 7%. The rest winds up in the oceans or in landfills, where they take 500 years to degrade and yet never fully biodegrade. Instead, degrade into little micro plastics that contaminate the soil and water. At this rate, it’s estimated that there’s gonna be more plastic than fish in the sea by 2050.

From the Guardian article:

Major drinks brands produce the greatest numbers of plastic bottles. Coca-Cola produces more than 100bn throwaway plastic bottles every year – or 3,400 a second, according to analysis carried out by Greenpeace after the company refused to publicly disclose its global plastic usage. The top six drinks companies in the world use a combined average of just 6.6% of recycled Pet in their products, according to Greenpeace. A third have no targets to increase their use of recycled plastic and none are aiming to use 100% across their global production.

Plastic drinking bottles could be made out of 100% recycled plastic, known as RPet – and campaigners are pressing big drinks companies to radically increase the amount of recycled plastic in their bottles. But brands are hostile to using RPet for cosmetic reasons because they want their products in shiny, clear plastic, according to Steve Morgan, of Recoup in the UK.

Cheerful thoughts, huh? In the meantime, get a reusable bottle.

Anxiety attacks affect 40 million people a year, including yours truly. It’s been a less than unpleasant experience where you get to feel tightness in your chest and a whole bunch of fast thoughts zipping through your brain. There's been a bunch of suspected causes, including brain chemistry, the stress of modern life, a lack of good diet and exercise habits, the fact that we’re fragile and finite meat creatures built to be halfway between the falling angel and the rising ape and then turned loose into an uncaring and absurdist universe, and a lack of serotonin (the happy chemical your brain should be making) being produced in the brain.

A new small study out of Japan has shown a link between vitamin deficiencies and anxiety. From the abstract:

Patients undergoing a panic attack (PA) or a hyperventilation attack (HVA) are sometimes admitted to emergency departments (EDs). Reduced serotonin level is known as one of the causes of PA and HVA. Serotonin is synthesized from tryptophan. For the synthesis of serotonin, vitamin B6 (Vit B6) and iron play important roles as cofactors. To clarify the pathophysiology of PA and HVA, we investigated the serum levels of vitamins B2, B6, and B12 and iron in patients with PA or HVA attending an ED. We measured each parameter in 21 PA or HVA patients and compared the values with those from 20 volunteers. We found that both Vit B6 and iron levels were significantly lower in the PA/HVA group than in the volunteer group. There was no significant difference in the serum levels of vitamins B2 or B12. These results suggest that low serum concentrations of Vit B6 and iron are involved in PA and HVA. Further studies are needed to clarify the mechanisms involved in such differences. 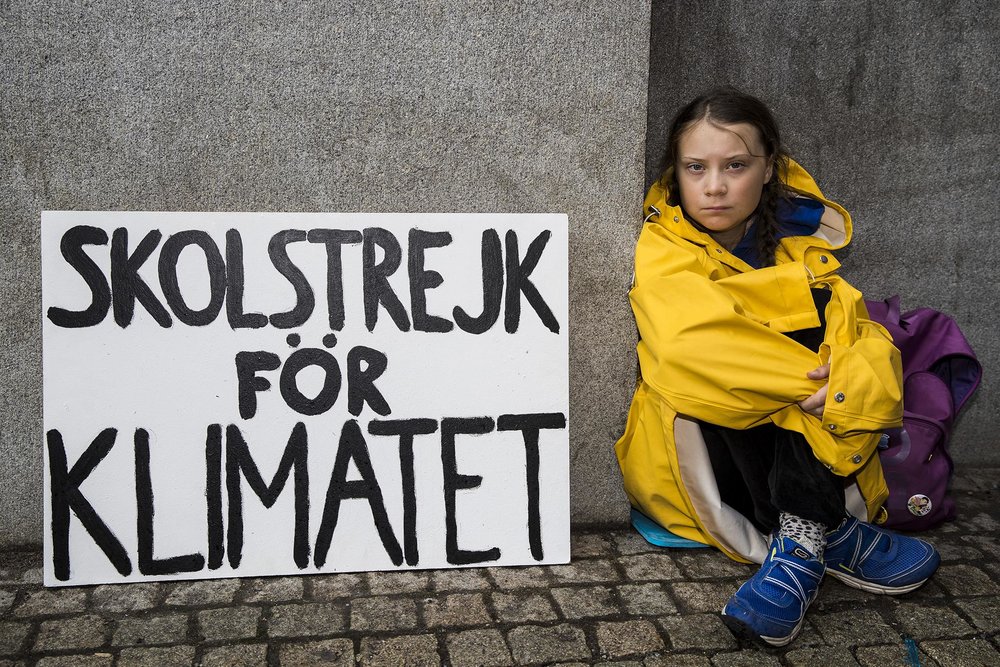 Greta Thunberg, the teenage eco-activist wunderkind who lead an international school strike to protest climate change and whose tale of serious natural catastrophes in her native Sweden filled her with anxiety and depression, is planning to attend the U.N. conference and Santiago, Chile, in December.

Even better, she’s traveling to the United States by boat. It’s part of her commitment to the environment that she wants to show the impact plane travel has on the environment.

"Taking a boat to North America is basically impossible. I have had countless people helping me, trying to contact different boats."

Great rose to fame thanks to her "Fridays for Future" efforts. She stopped eating meat, stopped flying, and stopped buying new things, and she would spend every Friday skipping school to stand outside the Swedish parliament in Stockholm. It’s become a weekly event that extends around the world with thousands of people. Thunberg describes the idea behind the strike as telling adults that she shouldn’t bother going to school and learning because politicians ignore scientists and work against any kind of future the kids could possibly have.

Thunberg says she doesn’t expect to meet with President Donald Trump while she’s in America, noting that he’s actively hindered conservation efforts and that meeting him would be “a waste of time.”

"As it looks now, I don't think so, because I have nothing to say to him," she told the AP. "He obviously doesn't listen to the science and the scientists. So why should I, a child with no proper education, be able to convince him?" 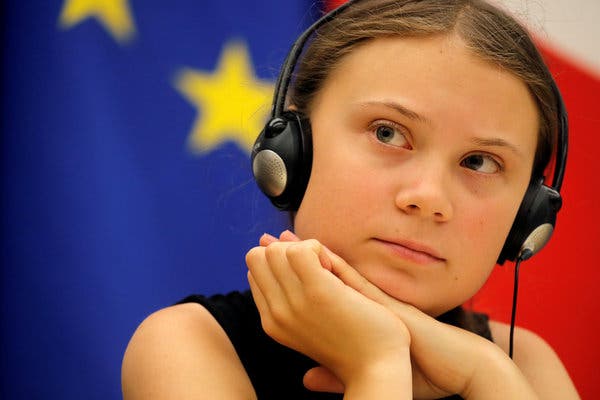 From the ABC article:

Although little-known in the United States, Thunberg has arguably become the figurehead for a new generation of European eco-activists worried that they'll suffer the fallout from their parents' and grandparents' unwillingness to take strong actions to combat climate change.

"This past year, my life has turned upside down," Thunberg told the AP. "Every day is an adventure, basically. Sometimes I have to pinch myself and say 'Is this really real? Has this actually been happening?' Because it has all happened so fast and it's hard to keep up with everything.

"In a way, I am more optimistic, because people are slowly waking up and people are becoming more aware of the situation. This whole 'Fridays for Future' movement is very hopeful," she said. "But also ... one year has passed and still almost nothing has happened."

Thunberg has spearheaded a change in the climate debate in Europe largely because her activism resonated with so many children, said Greenpeace Germany executive director Martin Kaiser.

"She has read all the science," he said. "That gives her a lot of credibility. She has motivated a whole generation in Europe to learn about climate change."